WATA and the gray areas of game preservation – Is there a better way?

Jason Zeitler April 24, 2022 Nintendo stock Comments Off on WATA and the gray areas of game preservation – Is there a better way? 33 Views

The gaming industry is young compared to other areas of entertainment and recorded culture – younger than film and television, and of course a baby compared to printed works. Still, we’re decades into gaming history now, especially if you go back to the systems of the 1970s, maybe even a little earlier. Even if you choose to focus on the post-crash era of “modern” gaming, we’re quickly approaching 40 years from that narrower perspective.

We see it every day as fans, of course – franchises like The Legend of Zelda, Super Mario and Sonic the Hedgehog are over 30-35 years old. We regularly have commemorative products and re-releases, and the way we enjoy and consume retro games is also constantly changing.

Despite all of this, one issue of growing importance continues to drift in with limited improvements and commitment from the biggest game companies and rights holders – preservation. It’s a topic we’ve touched on before, both in terms of the practical realities of dysfunctional aging media and difficult copyright issues.

It’s a topic that has come up recently, with Frank Cifaldi announcing that he has an agreement with WATA to verify and catalog rare game prototypes before they disappear into private ownership entirely. Before exploring what has ruffled so many feathers, a brief recap of the parties involved and why they matter in the game preservation space.

Working with WATA for the greater good

Frank Cifaldi is co-director of the Video Game History Foundation, an organization that deserves praise for its ongoing efforts to create and grow a video game research library. It’s an organization that also organizes events to showcase the story, collects key physical game history like hardware and magazines for its archive, while challenging and campaigning for companies like Nintendo to improve their practices. and their attitudes towards game preservation. Cifaldi is a key and respected figure in this space.

WATA is a company that first caught the eye for facilitating auctions of gaming collectibles at sky-high prices, making headlines as copies of games changed hands for huge sums. , such as a copy of Super Mario 64 that sold for over $1.5 million. One of the purposes of these sales is a “ranking” applied by WATA, and it describes itself as a “trusted leader in the ranking of collectible video games”. However, there have been accusations that the organization operates a manipulated market based on speculation and reversal, artificially driving prices high; there have also been allegations of collusion with auction house Heritage Auctions. Karl Jobst produced a lengthy video exploring various angles of the controversy. Questions based on these ratings are continually raised, with a suggestion that greed driven by WATA ratings is distorting and damaging the collectibles market.

Cifaldi, an advocate for game preservation, therefore caused a stir when he confirmed his work for WATA by checking out prototype games before they went to auction, some of the most genuinely rare products in the world. industry ; for some, it was difficult to reconcile the two. From a certain point of view, Cifaldi had made a pact with the devil. As Cifaldi puts it, however, his work allows him to verify and record data on rare game prototypes that might otherwise be entirely lost to the public eye, gaining a form of information to share before they disappear. .

For obvious reasons, I can’t share playable game data, but we found some good compromises. I have detailed reports, images, and even hashes for the game files, to make sure the audience is as educated as possible. Here is a PDF with the 125 I made: https://t.co/5iGJuroK9r— Frank Cifaldi (unlicensed).nes (@frankcifaldi) April 15, 2022

Of course, social media is rarely a place for reasoned debate, but after a few days for the dust to settle, Cifaldi posted a detailed thread outlining his reasoning behind the deal with WATA. It offers a defense of some collectors in terms of work and research behind many purchases, in addition to those large sums with each purchase. In the previous post, three years of reports were also shared, giving insight into the number of interesting prototypes that have been authenticated and registered.

The end justifies the means

While it’s easy to take this as a negative, given the poor reputation that many hold WATA in, we believe valid points are made about the gray areas, where compromise and reality are accepted and the best possible solution is found. Most would love a wonderland where all of the rare game’s story is shared freely for the public to enjoy. That’s not the world we live in, though, so it’s understandable to get involved on the auction market provided you get something back – in this case, recordings of rare non-commercial game prototypes.

We’re at a tricky time where preservation and old cartridges and failing systems make archives more necessary, but companies still see money to be made.

We’ve compared unfavorable gameplay record keeping in the past with older media, but similar trade-offs occur in these archives. Take rare books, for example. Universities and publicly funded organizations like national libraries do much of the legacy work in cataloging, preserving, and sharing rare book images. Yet it is the result of over 100 years of work and many more centuries of book history coming together. For example, many archives rely heavily on posthumous donations from collectors, so there will have been decades whereas these rare editions would have been in private hands. Universities and libraries also attend auctions to try to secure items, but are often outbid by individuals.

So even that scenario isn’t perfect, and it’s with these historical editions not having the same copyright issues that are still prevalent in the modern gaming industry. That’s where the big companies come into play – these are companies looking to profit from their products, not give them away. Nintendo is now sharing a controlled number of retro games on Switch through its Nintendo Switch Online subscription service, while SEGA recently gave details on Sound origins, which will bundle old games into a $40 digital package. We’re at a tricky time where preservation and old cartridges and failing systems make archives more necessary, but companies still see money to be made.

One area where the game situation is under stress is the failure of old technology. There’s also the question of how long companies should hold on to their “coffers” of old content in case they can reap more profits. The commercial angle would be “as long as copyright, intellectual property and trademark laws permit”, i.e. corporate law. What organizations like the Video Game History Foundation point out, however, is that companies like Nintendo (and many others) often fail to preserve their own source code practices. For example, companies sometimes turn to those who maintain the original game code for help, as their own virtual copies and archives are insufficient. 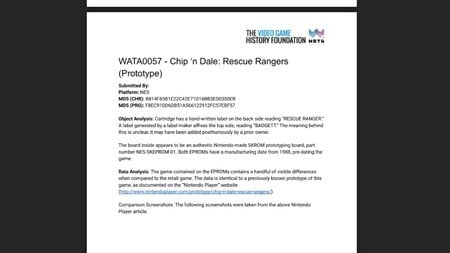 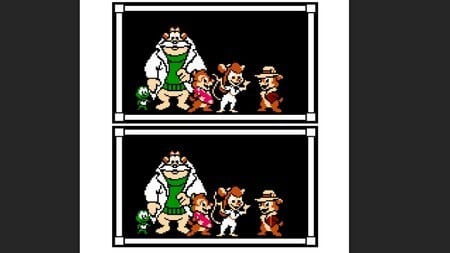 Cifaldi has created detailed analysis reports documenting everything that has been archived and verified so far (Images: Foundation for the History of Video Games)

It is often private groups or enthusiastic individuals who preserve the game’s history, and doing so privately is perfectly legal. The question, however, arises as to when should this story be open to sharing with the public? When can a classic game ROM be shared with the world? Are we waiting for a myriad of copyrights to expire, or are companies taking a more holistic view? Probably the first, of course.

Documenting a digital past before it disappears

And what about games that aren’t actually available through any legal means? These are also often blocked from public access, of course, leading to many arguments as digital stores close and games are truly lost outside of private copies and preservation. It’s just on the horizon for relatively recent games when the Wii U and 3DS eShop stores close.

It’s complicated and difficult, and the best solutions will naturally require some form of compromise. We’d love a scenario where big companies agree on a “term of sale” for games, maybe 40-50 years, after which public access to digital source code is allowed with no roadblocks or takedowns .

It sounds fanciful, of course, but unless a compromise is struck between business and preservation, we’ll be forced to deal with the devil or, worse, simply wait decades for copyright and data protection. other legal deadlines expire.