Kit & Krysta: “We both consider ourselves followers of Reggie”

Jason Zeitler February 24, 2022 Nintendo stock Comments Off on Kit & Krysta: “We both consider ourselves followers of Reggie” 37 Views

The news that Nintendo Minute hosts Kit and Krysta were leaving Nintendo marked the end of an era for many fans who have followed their careers with the company over the years of the fun video series. However, the pair soon revealed plans for their own podcast and it looks like they will stick together in the gaming world, only now with the freedom to tackle and discuss non-Nintendo video games. Yes, they apparently exist!

Kit and Krysta’s new podcast – aptly titled The Kit & Krysta Podcast – is already live, with episode one available and episode two arriving imminently at the time of writing. We highly recommend checking it out via your pod captor of choice (Apple, Spotify, etc.) or via the archived Youtube video (see bottom of this page).

We recently had the chance to ask Kit and Krysta a few questions via email about what they’ve been up to and what they’ve got planned. The first episode of their casting is all about exactly why they left Nintendo, so we won’t go into that here, but read on to find out what they think about being free to talk about non-Nintendo games, of their future plans and which Nintendo executive they would most like to be stuck in an elevator with…

Note: Answers are mostly from Kit unless otherwise noted.

Nintendo Life: First of all, your new Kit & Krysta podcast is live! This is the first of various projects you have underway, we believe. Can you tell us a bit about what you’ve been up to since your last day at Nintendo and why you decided on a podcast as your first adventure?

It was an exciting but also crazy time for us! We haven’t had much time to breathe since we both left Nintendo in January and turned our attention to launching the Kit & Krysta podcast in the following weeks. We’re both big fans of podcasts and think the format offers great flexibility in terms of having long conversations, connecting with the community, and being viable in both video and audio. 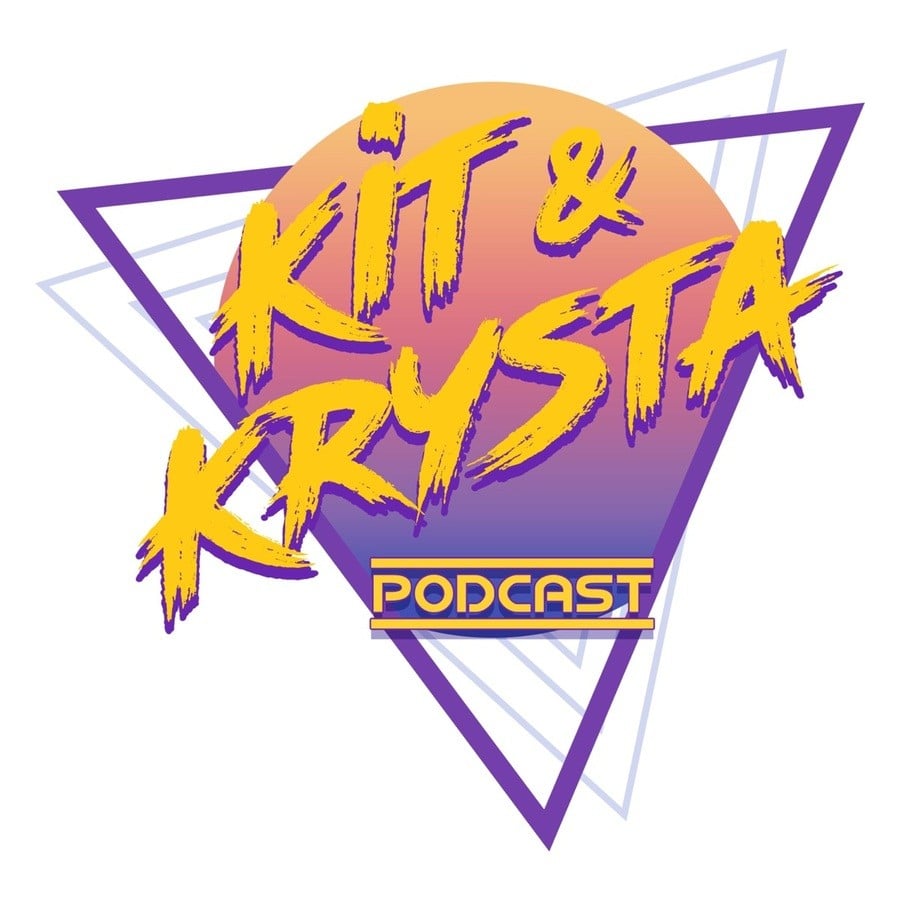 Are you going to stick to the gaming discussion or do you plan to branch out into other topics?

Video games will be our focus, but that doesn’t mean we won’t cover other topics from time to time. Much like a conversation with a friend, we ourselves don’t always know where the conversation will go once it begins.

How does it feel to be able to freely discuss other platforms now that you’re not Nintendo employees?

It’s awesome and it’s one of the things we’re most excited about with this podcast. We both enjoy gaming on all platforms like so many other gamers, and the next few months are truly filled with some great games on PlayStation, Xbox, and Switch that we can’t wait to play and discuss.

You two have worked together for a long time and are obviously very good friends, but have you hesitated to “stick together” in this post-Nintendo phase of your career?

Once we got over the hurdle of deciding to focus on content creation full-time, we didn’t hesitate to keep doing it together. There is a recognition that we share a wonderful creative spark and bring out the best (or sometimes the worst…) in each other. Nintendo Minute has been the most fun we have had working at Nintendo, so we are very happy to be able to continue with this new project.

Working with someone for so many years, you’ve probably had a fight or two, which must be tough when you have to appear on camera moments later. Have you ever had a falling out or disagreement just before filming a show?

Pencil case: We bicker a lot (often while we’re taping a show!), but somehow we’ve never really had one of those big fights. There was a funny moment when we were filming a Nintendo Minute shopping spree episode and we realized that some rules could have been interpreted differently. Krysta was sure she had won, but the competition ended in a tie, and she let me (Kit) have it with a Christian Bale-esque rant that went on and on. All I could do was laugh!

Krista: This is Krysta, let me just say the rant was really needed after a long day of filming and lots of rules from Kit. In the end, everything we bought in this video went to charity and that’s what was important.

Many of your subscribers may not realize that Nintendo Minute was just part of your job at Nintendo. Can you explain what a typical day at the office was like for the two of you?

It’s true that Nintendo Minute was actually only a small part of our jobs at Nintendo, and maybe not even a part of our “formal” jobs. We both worked in the communications department, starting with public relations but later focusing on social media, content creator relations and original content creation. Every day at Nintendo was different and that kept things fresh for us. There were always meetings, working on products that were soon to be launched and planning titles that were only on the horizon.

Beyond Nintendo Minute, what Nintendo-based works or projects come to mind that you’re most proud of?

I happened to work on the very first episodes of Nintendo Direct… It’s crazy how big and important it’s gotten now, but it was fun working on it as we were really trying to innovate and establish the basic format — Kit

Pencil case: I happened to work on the very first installments of Nintendo Direct when few people knew what it was or why we were doing it – and that included people both inside and out of the company! It’s crazy how big and important it has become now, but it was fun working on it as we were really trying to innovate and establish the basic format.

Krista: My last years at Nintendo were mostly focused on the company’s work with content creators. I helped shape the program that’s in use now, and it was some of my favorite work I had done in my 14 years. The content creators we work with are so passionate about Nintendo and so talented – it’s truly a pleasure to be with them and many of them are good friends of ours.

You’ve been with Nintendo at both great times and less than great times (hey, we love the Wii U, but we were in a relative minority!) – what was the general morale of the company in those days before the arrival of Switch?

We’ve really seen it all – from the heights of the Wii and DS, to the challenges of the Wii U and 3DS, to the Switch phenomenon. Over the years, the company has always kept an incredibly stable point of view on all of this. Nobody got too big a head when things were going well, and nobody got too low when we were in trouble. I guess it helps when your company is over 125 years old, but the perspective is definitely unique.

We’ve heard that Nintendo likes employees to step in to voice small roles or record extra lines in their games. Have any of you ever done voice work in Nintendo games?

No, we didn’t do any in-game voice work – that would be handled by Nintendo’s incredible localization team. It’s truly an amazing team that plays a big role in making Nintendo games so fun and charming.

My last years at Nintendo were mostly focused on working with content creators. I helped shape the program that is in use now, and it was some of my favorite work I had done in my 14 years – Krysta

Do you see yourself going back to work for a big company in the future, in gaming or otherwise?

No one can predict the future, but I think we just love being around games and game fans. It’s a very different experience for us to work for ourselves after being at big companies our entire career, and so far it’s been a lot of fun having all that freedom.

We’re asking for a friend here, but how many times have you met Shigeru Miyamoto? More times than you can count on your hands?

We really should have kept track of the exact number, but let’s say it’s in the “many to many times” range. We were always interacting with him at E3 and he also did a number of promotional trips to the US that we often contributed to. He’s a truly amazing person.

Can you give any hints about any other projects you have in mind over the next year?

We have a few goals for ourselves once we get past the madness of this launch. First, we really want to expand the experience and offerings for our Patreon members. We’re starting small with just one early access membership tier, but we’d like to roll out many more soon.

Second, we know people associate us with video, and we want to get back to making regular videos where we play games or discuss silly topics. We did a video last week where we showed off some of the cool stuff we’ve collected over our years at Nintendo and the response has been wonderful.

Finally, we really want to be able to interact more directly with fans. Obviously the pandemic has had an impact on what we’ve been able to do, but we miss going to shows like PAX and hosting events there or just hanging out and talking games with people.

And finally, given the choice, which Nintendo executive – past or present – would you rather be stuck in an elevator with for 3 hours?

We were very fortunate to work closely with Reggie, and we both consider ourselves disciples of Reggie. The answer, however, should be Mr. Iwata. We had a number of interactions with him over the years and he was not only one of the smartest people we’ve ever met, but also one of the kindest and genuine. We both miss him very much and we would really make these three hours together count.

Many thanks to Kit and Krysta for taking the time to answer our questions. You can follow them on Twitter (@KitandKrysta) and they’ve set up a Patreon if you’d like to directly support the pair in their future endeavours. Be sure to check it out!